Thank you for choosing Serverblend as your Rust Server Host.My Rust Server Isn't showing On The List!You may be wondering - Where is my server on the list? Or - Won't this mean nobody can find me server? The server list is user independent, meaning what you see will be entirely different from anyone else. The server doesn't run off on a central server and operates much differently from your typical server list, hence why you may or may not find your server.There are some basic procedures to follow help ensure the best result, but will not always assure your server will show:• Shorter and more unique server name• Keep the server alive - Up time helps!• Having active players.Though the way that the server actually performs is listed as shown:The client asks Steam for every Rust ServerThe Rust client then sends a query asking for all the servers provided by #1Then the servers reply to those queries, then they reply to the browser.If the server itself is quite far from you location wise, or your internet is performing poorly, it'll appear slowly for you or not at all; for others it will appear faster.FacePunch have reached out to Steam regarding why a lot of queries aren't being processed as they suspect the Steam Backend has been altered; causing more problems.We also have reached out to FacePunch regarding the situation here: 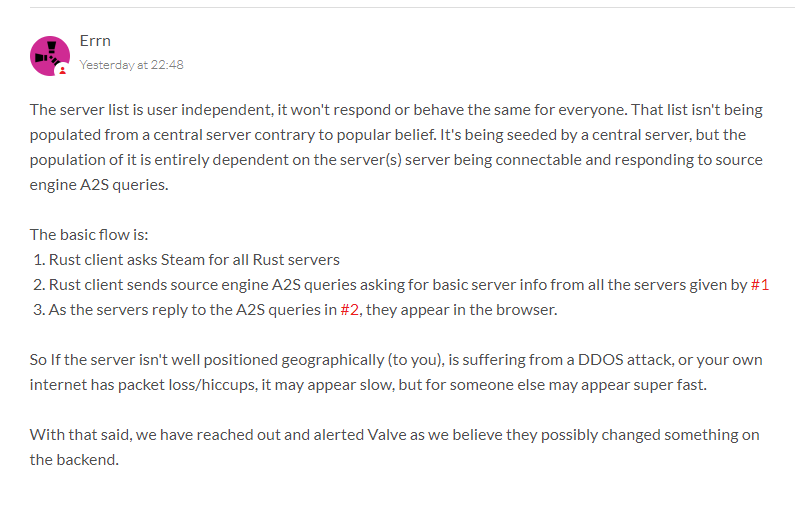 In a lot of scenarios, this is something we are unable to resolve ourselves entirely and is very much down to your own server list, your connection and factors outside a hosts control though are happy to move your server and assist you however we can.Anyone can reach out to Facepunch via their support site here: https://support.facepunchstudios.com/hc/en-us

Was this article helpful?